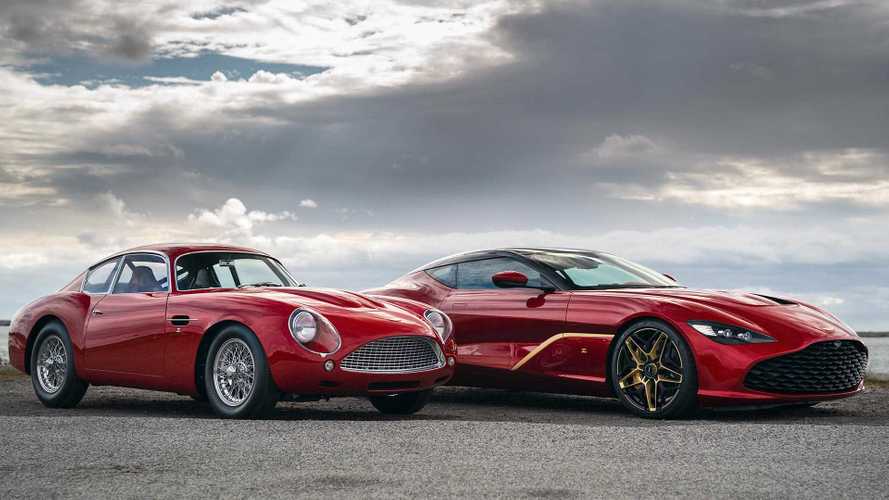 The modern twin to the previously unveiled DB4 GT Zagato Continuation, DBS GT Zagato forms the contemporary half of this unique pairing and will pack 760bhp through its 5.2-litre twin-turbo V12 power unit. This uniquely ambitious project, created to celebrate the centenary of the legendary Zagato signature, pays tribute to an icon of the past and creates a classic of the future.

With DBS GT Zagato breaking cover today for the first time in full-size, finished form at the new and exclusive Rhode Island event, the world has received its first glimpse of this iconic duo. With a price tag of £6m - plus local taxes - each pair represents the most valuable new sports cars yet built by Aston Martin as the luxury British car maker celebrates its longstanding association with the world-renowned Italian coachbuilder and design house, Zagato.

Indeed, this unique collaboration extends a remarkable creative partnership spanning almost 60 years. One that has consistently generated bold and breathtakingly exciting designs, the latest of which is the DBS GT Zagato.

Shown in Supernova Red – a paint colour exclusively reserved for the DBS GT Zagato ‘Centenary Specification’ – with contrasting exposed carbon fibre accents and Satin Black and Gold 3D machined wheels, demonstrates the meticulous attention to detail that marks out every Aston Martin and showcases the key features of this pack.

Aside from the gloss finish carbon fibre roof and rear diffuser, the eye is drawn to the model’s literal and figurative jewellery in the shape of its solid 18-carat gold wings badges front and rear, black anodised active front grille and its gold anodised side strakes and centre lock wheel nuts.

As with all Aston Martin options, Aston Martin’s customisation service ‘Q by Aston Martin’ can take the customer’s requests a step further. Utilising these additive processes, a truly bespoke part can be created, with the material, finish and geometry of these parts capable of being specified to a unique final design. The use of this cutting-edge technology around the interior allows a customer to commission completely bespoke components – with parts, materials, and finishes designed specifically to their brief.

Aston Martin Executive Vice President and Chief Creative Officer Marek Reichman, said: “The design studio at Aston Martin has risen to the task magnificently, working alongside Andrea (Zagato) and his team. They have taken the already fabulous DBS Superleggera and shaped it into something which retains its Aston Martin identity, yet expresses itself as only a Zagato can. It is the modern expression of a timeless icon.”

Andrea Zagato, Chief Executive Officer of the Design House, commented: “Aston Martin’s elegance, class and purity of style have always blended perfectly with our own rationalistic design language. Zagato’s Centenary represents a bridge between the past and the future, strengthened by the shared vision for an innovative approach to collectibles, recently coupled in pairs and twins with the aim to reach new standards of exclusivity in the world.”

The DBS GT Zagato sits alongside the DB4 GT Zagato Continuation in the DBZ Centenary Collection: the latest Continuation sports car to be created by Aston Martin and hand built at the brand’s global centre of heritage excellence, Aston Martin Works.

The meticulous construction process at the brand’s renowned Heritage Division headquarters in Newport Pagnell, Buckinghamshire, uses the unique skills on hand at the largest, best equipped and most knowledgeable Aston Martin restoration centre in the world.

Each of the 19 DB4 GT Zagato Continuation cars are being built at Aston Martin Works to the highest possible quality using a blend of Sir David Brown-era old world craftsmanship, with the sympathetic application of modern engineering advancements and performance enhancements.

Paul Spires, President of Aston Martin Works, said: “Paired with the new beauty that is the stunning DBS GT Zagato, the DB4 GT Zagato Continuation cars are a unique and fitting celebration of the brand’s 60-year love affair with this unmatched Italian automotive style icon.”

The Audrain’s Newport Concours & Motor Week runs until Sunday 6 October and includes some of the U.S. East Coast’s most notable locations including the historic mansions of Bellevue Avenue, the International Tennis Hall of Fame and the Audrain Automobile Museum.

All DB4 GT Zagato Continuation cars will be delivered by the end of 2019.

Aston Martin Lagonda is a luxury automotive group focused on the creation of exclusive cars and SUVs.  The iconic Aston Martin brand fuses the latest technology, exceptional hand craftsmanship and timeless design to produce models including the Vantage, DB11, Rapide AMR and DBS Superleggera.  The Lagonda brand will relaunch in 2021 as the world’s first luxury electric vehicle company. Based in Gaydon, England, Aston Martin Lagonda designs, creates and exports cars which are sold in 53 countries around the world.

Lagonda was founded in 1899 and Aston Martin in 1913. The two brands came together in 1947 when both were purchased by the late Sir David Brown. Under the leadership of Dr Andy Palmer and a new management team, the Group launched its Second Century Plan in 2015 to deliver sustainable long-term growth. The plan is underpinned by the introduction of seven new models including the DB11, new Vantage, DBS Superleggera and an SUV, as well as the development of a new manufacturing centre in St Athan, Wales.

Zagato, the Milanese coach building Atelier and legendary design signature, is celebrating its 100th anniversary (1919-2019). In its century-long history, it created some of the most beautiful and significant cars of all time, all of them of collectible value. Among the 440 different models produced in collaboration with 44 manufacturers, there are almost twenty Aston Martins. Today, Zagato is a Total Design Studio, still independent and in the hands of the third generation of the founder’s family.